I am not much of a beer drinker.  No particular reason why.  For some reason it just hasn’t ever really appealed to me.  I DID, however, happen to graduate from a college whose senior tradition involved drinking a pitcher of beer as quickly as you could to get to the ring that you had dropped to the bottom. Not very appealing when you don’t like beer, so I chose to dunk my ring beneath 8 delicious scoops of ice cream instead. It was glorious. I’d definitely do it again if I didn’t know any better.

My husband on the other hand? He went the traditional route, and downed his pitcher in just eighteen seconds. Definitely a beer drinker (with very proud parents I might add).

A couple of weeks ago I was asked to design a couples shower invitation for a {soon to be} husband and wife who both happen to be beer drinkers, and are looking forward to their upcoming honeymoon to Canada. Fun, right? Never in a million years would I have thought to create something like this!

A little help from the internets was definitely required. Normally, this is not something that I would share with you guys. However, while doing my research, I realized that beer might actually deserve a little more respect than I’ve been giving it! Seriously… This stuff is legit.

Now, I do have to share with you guys that the lovely ladies I am working with ended up going with one of my other designs. BUT, I had such a great time making these that I just have to share them with you all!  Both were inspired by canadian beers. The first by Molson. The second by Carling Lager (albeit very loosely). 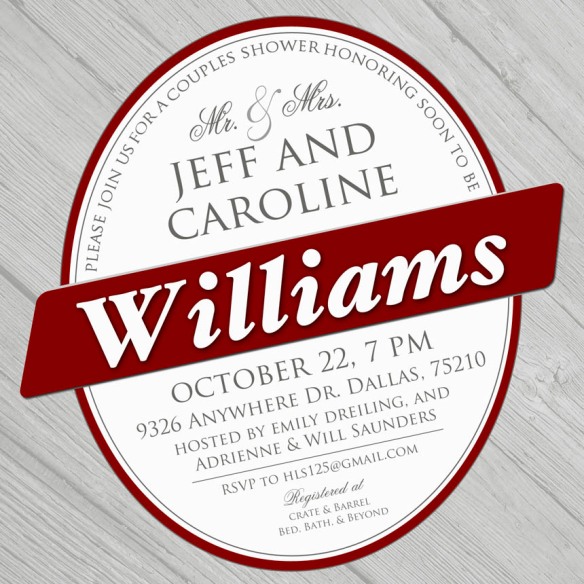 Too bad I don’t have any Canadian friends. I’m thinking a Texas version of this might be fun too though. Shiner Bock maybe? Any takers? Let me know!